EA baseball players visited the campus of the University of Mobile! They met with Baseball Head Coach Mike Jacobs and Assistant Coach Jon Seymour where the players demonstrated their talent in the batting cage & bull pen. 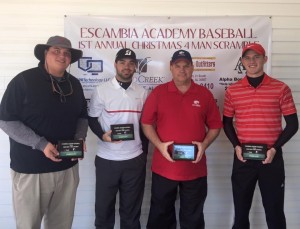 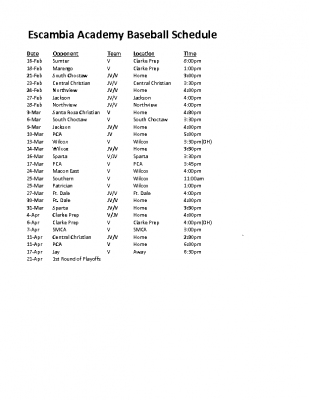 By Andrew Garner Published 12:01 am Wednesday, March 22, 2017
Escambia Academy went 2-1 against Wilcox Academy in area action last week to clinch a berth in the AISA Class 2A state playoffs.
The Cougars swept WA, winning 13-0 on March 14, and 17-14 on Thursday. EA had to forfeit the third game of the series because it used a pitcher who went over the allotted pitch count compared to the number of days of rest needed.
EA baseball coach John Fields said the mix up was an oversight.

Last Friday, the Cougars fell 7-4 to Pensacola Christian Academy.
“We were out of pitching,” Fields said. “They’re a lot better and much improved. That’s the best Pensacola Christian team I’ve ever seen.”
At present, EA is 8-4 on the season with a tournament coming up March 24-25 at WA against Macon East, WA and Clarke Prep.
Fields said he is going to try and use the weekend to get ready for next week, which includes games against Fort Dale and Sparta.
One thing about the team that Fields said he likes a whole bunch is the team’s ability to not give up when down.
“They’re very resilient,” he said. “All the games we’ve lost they haven’t quit.”
Fields said the Cougars are loaded with scrappy players.

“We put the ball in play,” he said. “We’ve got some fast kids. We’ve got a good offensive team. We’re just struggling defensively with pitching. These kids work hard.
“They have never given up,” he said.
Fields said if the kids come back after this week’s spring break holiday with the same attitude as the first half of the season, the wins will come.

Check back as we update our Baseball page for the 2018 Season.