Tyler Newton broke a state record, and Chase Bell broke two, to lead the way as Escambia Academy captured its seventh Class 2A state title in the last nine years during the 2020 AISA State Powerlifting Championship Meet at Pickens Academy on February 18.
In addition to capturing the state championship, EA also finished first overall.
“We went into meet with 24 overall state records,” EA Headmaster Hugh Fountain said. “It is awesome to break two records. We now have 25 confirmed state records because one of the records that was broken was a former EA record. Since it was our record, it doesn’t count towards the overall number.”
According to Fountain, what sets EA apart from other AISA schools is that the Cougars weightlift during the course of the year and most of the kids also run track, which gives the school an edge in conditioning and competitive competition.
Fountain explained that EA’s student-athletes are a greedy, tough bunch of kids, who work very hard, never take for granted their successes and work as a team.
Newton broke the state record for deadlift in the Super Heavyweight class, and Bell broke state records for deadlift the most total weight lifted in the 140-lb. classification.
Along with Bell and Newton, the other first-place finishers for EA in their respective weight classes were Shawnton Riley (98 lbs.), Samorian Clark (105 lbs.), Orlando Medina (115 lbs.), Ty’rese Smith (175 lbs.), Troy Fountain (242 lbs.) and Chris Long (275 lbs.).
Second-place finishers for the Cougars were Josh Spruill (123 lbs.), Matt Brittingham (148 lbs.), Daughtry McGhee (158 lbs.), Shannon Wheat (165 lbs.), Randall Bonds (181 lbs.) and J.J. Stevens (242 lbs.).
Parker Robinson (132 lbs.) and Kelan Riley (81 lbs.) rounded out EA’s top-three finishers, each claiming third place. 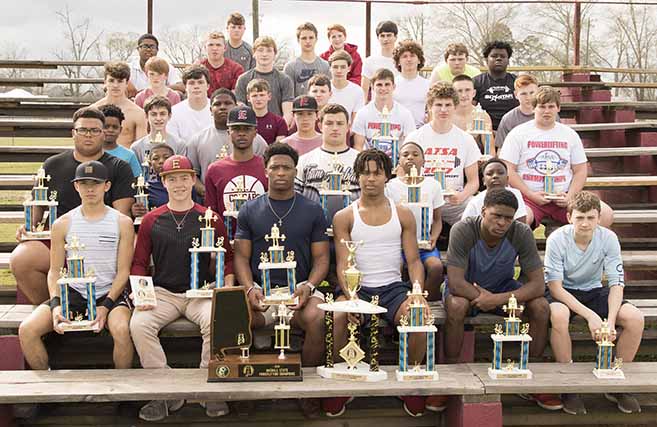 For the second year in a row, Escambia Academy’s 38-member weightlifting team — with several members battling flu, colds and other ailments — captured seven individual state championships. One EA lifter tied a state record, and 10 others earned either runner-up or third-place finishes in the AISA Region 3 Weightlifting Championships.
The Cougars won the Class 2A State Championship and overall State Championship. The competition was held February 18 at Pickens Academy.
During last year’s AISA Powerlifting State Championships, three EA lifters broke state records, seven earned individual state titles and seven other students were runners-up or secured third place finishes.
Chase Bell, who tied a state record in the 140-pound division, was named overall champion this year in the AISA lightweight class.
EA did not have any females compete this year, despite efforts to change that.
Joining Bell as one of EA’s state title winners, and their respective weight classes, were:
Shawnton Riley (81 pounds), Orlando Medina (114), Brandon Gulsby (132), Shannon Wheat (165 pounds) and Jason Davis (232 pounds).
Six Cougars were state runners-up: Samorion Clark (98 pounds), Matthew Brittingham (132 pounds), Ty Williams (148 pounds), Tyrese Smith (175 pounds), Patrick McGhee (205 pounds) and Tyler Newton (MSHW).
Four other EA boys won third-place trophies: Jaiden Santiago (tied for third in the 98-pound division), Joshua Spruill (114 pounds), Hunter Smith (181 pounds) and Troy Fountain (258 pounds).
“We are very proud of what we have been able to accomplish over the years. We have been able to win 5 out of 6 overall championships and have been very competitive,” Escambia Academy Headmaster Hugh Fountain said. “It all comes down to one day. It is the same in any sport that you play, and I am very proud of the kids.
“We had to fight for this one because we had a lot of kids who were fighting illness, but we were able to capture the victory. I am very proud of our kids and school.” 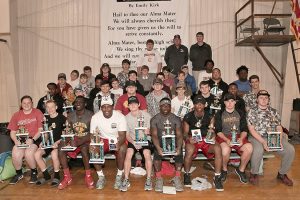 The team’s chances at another state title were hampered by the AISA’s scoring system, which combined the total weight of each school’s male and female competitors.

“I wish they’d change that,” said Fountain, whose team had only one female competitor. (The lone EA girl, Cassidy Murphy was state runner-up among female lifters.) “Our boys performed well, and our one girl did well, but she was the only girl we had, and that made the difference.”

In addition to winning the state title, the Cougars broke numerous state records.

EA’s Kris Brown broke the state dead lift record with 555 pounds; and the bench record with a lift of 520 pounds.

Chase Bell tied a state record by lifting 255 pounds in the dead lift.

Each lifter competed in individual weight classes. The full results are below:

A group of more than 50 lifters and coaches traveled to Pickens Academy in Carrollton, Alabama, February 19, to participate in the event, fielding both a boys and girls team. Fountain said that this was the first year for the girls competition, which has only three weight classes as opposed to the boys 18 classes.

“It is much harder to place as a female lifter,” Fountain said. The EA team had seven lifters who won state titles in their divisions – Chase Bell at 81 lbs., Jackson Bonner at 98 lbs., John Sawyer at 140 lbs., Kris Brown at 158 lbs., Gordon Brooks at 175 lbs., Nolan White at 258 lbs., and James Fuqua in the super heavyweight division.

“Our kids have come to understand that weight lifting is important in every sport,” Fountain explained when asked about the size of his team. “Every kid who plays high school sports hopes to go to college and play athletics there. We help them understand the way to achieve that is in the weight room. From the lightest to the heaviest, every athlete can improve if they work hard enough at it.”

1
1
Stop by and see what makes EA so special! Schedule a Tour