We are very excited about starting the 2018-19 school year. Our number one goal for this year is to “give each child a year that will have a positive influence on their life, for a lifetime.”

As most of you know, this will be my first full year as the headmaster at Escambia Academy. I have learned much this summer. I have woken each morning with doing what is best for your child in my mind and in my heart. Getting our curriculum stronger, making our staff better and maintenance of the buildings and grounds has been my number one priorities. It has been a fulfilling summer and now it is time for “the rubber to hit the road.”

We will have a “meet and greet” on Tuesday August 7th from 3:00 until 6:00pm. This is optional, but we’d love to have you come by. Feel free to visit the classroom and ask questions to the teachers. At Escambia Academy, we believe that the strongest link to your child’s education is the teacher/parent link. The lunchroom will also be open if you have any questions.

Wednesday is the first day of school for students and school starts at 7:45am each day. Students are considered tardy if they are not in the room when the bell rings at 7:50. Please be sure students are dressed appropriately each day. Students are not required to wear chapel uniforms until Wednesday, August 15th. Please be aware that Chapel uniforms are required for students (Skirts and white button up shirts for females / Long Khaki pants and button up white shirts for males) Every Wednesday. School will be full days on Thursday and Friday (school dismissal at 3:00).

We are going to provide an enrichment elective for grades 1 thru 4 this year. We are also providing middle school physical education/ weight lifting separate from the high school. We are also adding Art, Mentoring, Basic Vocational Tech class (home repair, basic carpentry), duel enrollment, and office aides to our high school electives. Hopefully all individual schedules are complete since that time has already passed.

In closing, if you have any questions or complaints please send them by way: Text, email or call. Nobody can help you with a school problem at EA better than myself. Dawn Kelly will be our new Office Manager this year and can be reached at 251-368-2080. WE ARE FAMILY!

I hope everyone has had a great first week of our summer holidays.

Report cards are ready to be picked up. The raffle tickets will be available on Monday, June 13 so you might want to wait and pick everything up at one time. Don’t forget summer reading list and supply lists.

There is a school calendar on the school’s website at 2016-2017 School Calendar. Feel free to call or email if you have any questions regarding school.

Have a great summer. 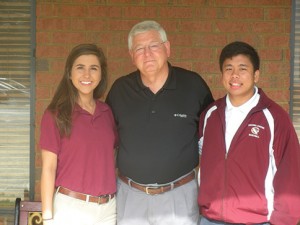 From left, Abby Smith, EA Headmaster David Walker, Paolo Gorme Most of Escambia Academy’s students will be able to put school out of their minds during the summer, but Abigail “Abby” Smith won’t be afforded that luxury. Abby, who is slated to enter her senior year at EA when the 2016-17 term begins in August, will spend at least one week participating in (what else?) an educational program.

The 16-year-old EA majorette was recently tabbed as one of the area high school juniors who will participate in the annual Southern Pine Rural Electric Membership Cooperative’s Youth Tour, which consists of a week of fun and learning in the nation’s capital. The program is designed to help young people develop leadership skills.

“I’m very excited,” said Abby, daughter of Allen and Pam Smith. “I didn’t think I would get it, and that’s how I acted in Montgomery. I’m glad I didn’t think about it, because I would have psyched myself out.”

The trip to the state capital she referred to was the second leg of a two-part process during which the final selections were made as to which teens would be a part of an all-expenses-paid, week-long trek to Washington, D.C. in June. The trip itinerary includes visits to and tours of several national monuments, along with the opportunity to meet some of the state’s and the nation’s political leaders.

The 11th-grade applicants lucky enough to make the final cut must meet several criteria. Each must be the son or daughter of a Southern Pine member; he or she must compose an essay on a topic chosen by the electric cooperative’s communications staff; and each must survive a one-on-one interview.

EA was also represented in the initial phases of the competition by Paolo Gorme, 18, who is a member of the school’s football and golf teams and who will be Abby’s escort to the upcoming junior-senior prom. Paolo’s parents are Manuel (also known as “Ditto”) and Kharina Gorme.

Sheilah Sawyer, who teaches computer science and finance at Escambia Academy, said the duo – each of whom is also a member of the Beta Club and is involved in the EA Student Government Association and in Youth Leadership Atmore – helped make the choice of school reps a fairly easy one for the faculty honors committee.

“Both are very strong academically, and both are well-rounded,” Ms. Sawyer said. “They are extremely active members of their churches and their community.

They are the cream of the crop, and that’s why they’re honored the way they are.”

EA Headmaster David Walker praised both students. He and Ms. Sawyer said they had no doubts that Abby would serve as a more than capable ambassador for the school and the community.

“There’s no doubt about that,” Mr. Walker said. “I know she’s looking forward to the trip, and we’re all looking forward to her making it.” Ms. Sawyer said Abby was destined for even greater things next year – she’s on track to be the valedictorian of her senior class. – See more at: https://www.atmorenews.com/2016/04/27/abby-smith-chosen-for-youth-tour/#!prettyPhoto 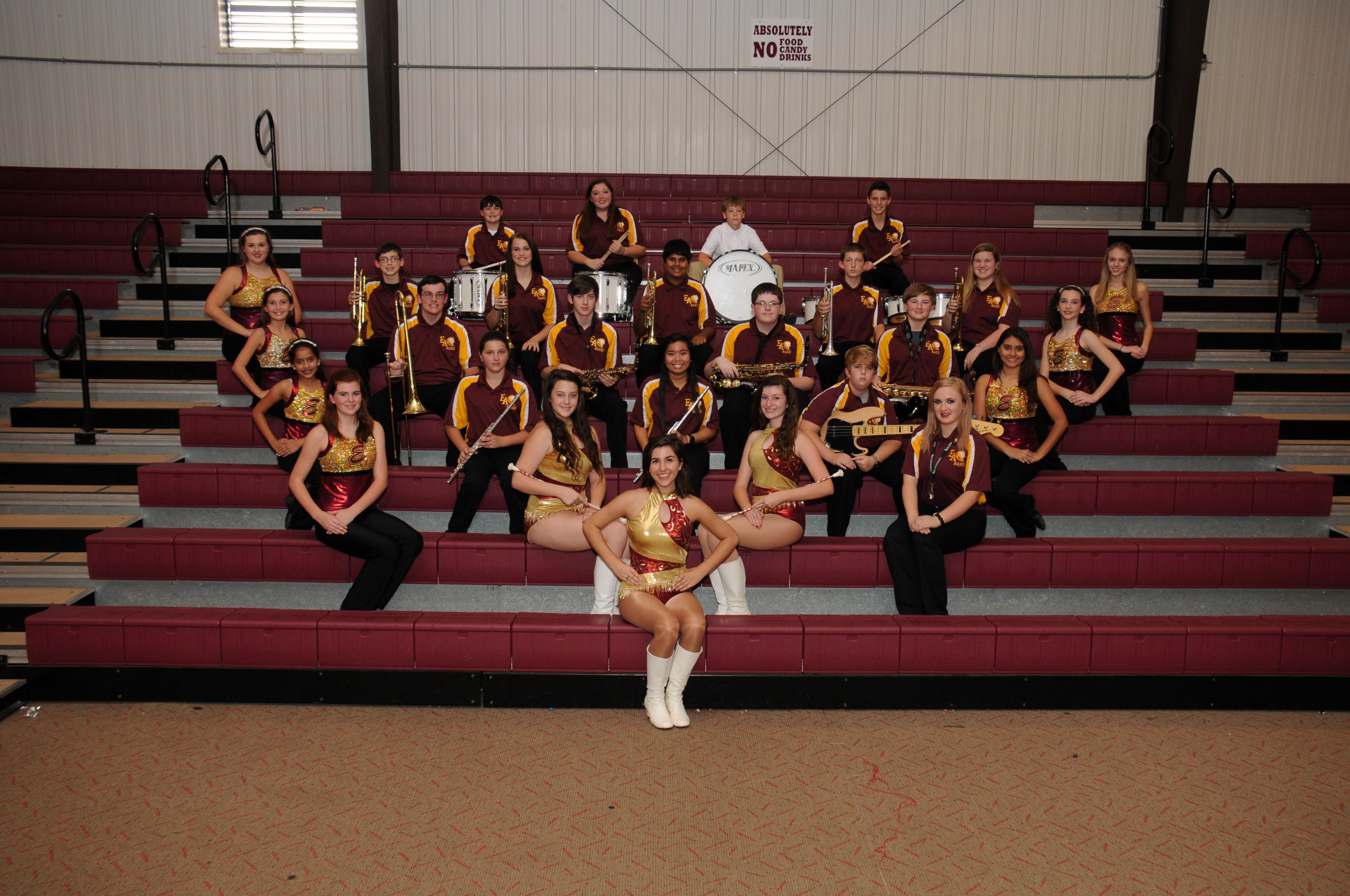 Escambia Academy is seeking a full time band director for the 2016-2017 school year.

Escambia Academy, located in Atmore, Alabama is seeking a full time band director for the 2016 – 2017 school year. Applicants must be able to teach courses in other areas in order to be full time.

Resume should be sent to:

We now have the 2015 results for the ACT, the widely-known test of college readiness. Congratulations to our students, faculty and staff. 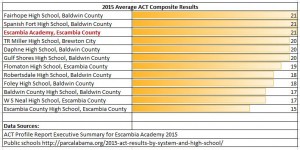