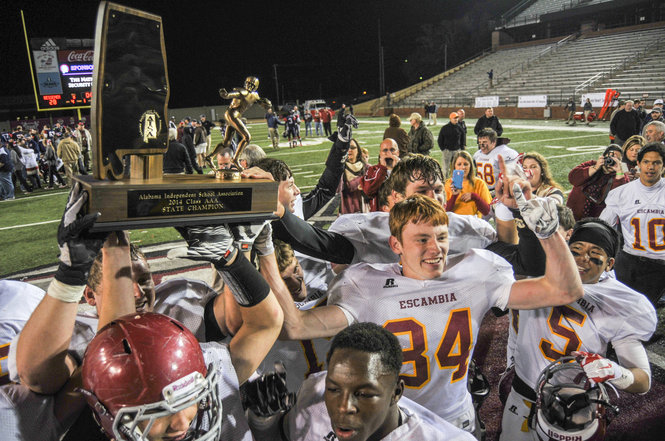 By GARRETT KIRK News Sports Writer The Escambia Academy Cougars played Bessemer Academy in the AAA State Championship this past Friday, November 21, at Veterans Memorial Stadium in Troy, Alabama. This marked the Cougars’ first trip to the state championship in school history. The incredible support that was shown to the team before, during, and after the game by alumni, fans, and the community helped give the Cougars great confidence, and when they took the field in Troy, there was no doubt to anyone that they were there to win the title.

The Cougars came into the game with a 10-1 record with their only loss coming from Bessemer in the regular season. After Escambia’s poor performance in the first game, some might have written the Cougars off as sure losers. However, every football fan knows that it is hard to beat a team twice in a season.

The Cougars received the kick-off to begin the game and the craziness began. The Rebels came up with a stop on Escambia’s first possession and then a missed block from the Cougars allowed the Rebels to block the punt on fourth down. The Cougars held tight on defense and got the ball back to the offense. The offense put together a long drive of third- down conversions and capped it off with a fade thrown to Malik Salter in the corner of the end zone. The extra point by Brett Gorum put the Cougars up 7-0.

The Rebels scored twice before the half and held the Cougars to only 1 touchdown, making the score at the half 14 – 7 Bessemer.

The second half began with a fumble from Bessemer and a quick equalizing touchdown from the Cougars. Bessemer struck back in the third and got a 2-touchdown lead on EA. Then, after a long play-action bomb to senior Scott Brantley, the Cougars made it 21 – 28. The defense came up big with a stop, and the Cougars put together a long touchdown drive to tie the game up 28 – 28.

Bessemer had a chance to tie with almost a minute left on the clock, but the Cougars’ defense held strong. The Rebels’ quarterback was forced out of the pocket on first down, and he made a bad decision that led to Kris Brown intercepting the pass and sealing the win for the Cougars and giving them the title of State Champions.

The Cougars’ offense produced, but not in the regular fashion. While EA did have 230 yards rushing, they also had 100 yards passing and 3 of their scores came through the air as well. Malik Salter, Scott Brantley, and Tim Finklea all had a receiving touchdown on the night. The rushing leaders on the night were Kris Brown and Brett Gorum with a touchdown each. The Cougars’ defense had a decent night. They allowed only 28 points and 250 total yards from Bessemer. In any case, it was enough to get the job done.

The leading tacklers on the night were John Patrick Sawyer with 9, Josh Fields with 4, and Garrett Kirk with 3 and a quarterback sack.

The Cougars made Escambia Academy history by winning the school’s first ever State Championship. This was truly a game for the ages, and all of the coaches and players thank the supporters of this team and are looking forward to another trophy next year.