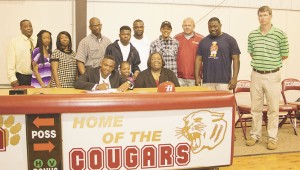 Escambia Academy running back Gordon Brooks announced Friday morning that he plans to continue his football career at Huntingdon College in Montgomery.

Brooks signed his letter of intent in the EA gymnasium, surrounded by family, friends, teammates and coaches.

“This is what high school sports is all about,” EA football coach Hugh Fountain said. “When kids play in sports, it helps to give them more self-discipline in school, and they learn to handle more responsibilities. This is a great opportunity for Gordon to continue playing the sport he loves, while getting an education.”

Fountain said he was especially proud of Brooks, because he had to work hard to get the required score on the ACT to attend Huntingdon.

“He worked extremely hard, not just on the field, but also academically, in order to achieve his goal,” Fountain said.

Fountain said Brooks had been considering playing at some other colleges, but fell in love with the campus earlier this year when he participated in the AISA All-Star Game. Brooks was also able to meet several members of the Hawks’ coaching staff.

“Gordon is a great kid,” Fountain said. “He’s been a very steady player and was a team leader for us. To know Gordon is to know a guy who comes to practice every day and doesn’t complain. He was an example of the type of team we had this year.”